Privacy is one of the most concerning issues in the 21st century and the subject of a lot of internal research and discussion at PPIO. Given the importance of this issue, there are many technologies related to privacy protection in the blockchain world. Our previous article, The A-to-Z on zkSnarks discussed why a zero-knowledge proof is ideal for authentication so no one else knows what you’re communicating. Today we will analyze another technology related to privacy: Ring Signatures.

To recap a zero-knowledge proof means that the prover must convince the verifier that an assertion is correct without revealing any useful information to the verifier. In other words, I need to prove to you that I know a secret, however, I can’t let you know what that secret is. Ring signatures, on the other hand, is where you hear a secret, however, you don’t know which person in a group has said it to you. A ring signature achieves the purpose of protecting the identity of the signer by hiding his public key into a set of public keys.

Using a ring signature removes the group administrator and does not require cooperation between ring members. The signer can sign independently by using his private key and the public key of the other members in the group. The other members of the group may not know that they are included in it. The advantage of this is that besides the unconditional anonymity of the signer, other members of the ring cannot forge the true signer’s signature. An external attacker also cannot forge a signature even if it is based on a valid ring signature.

Currently, several projects that use ring signatures include Monero, Boolberry, StealthCoin, XCurrency, and others. The Ethereum platform also adds a CryptoNote-like ring signature.

So how does ring signature do all this? In the next section, we will use elliptic curves to illustrate the key points and principles of a ring signature.

How Is A Ring Signature Generated?

Suppose the signer has a private key sk and a public key pk. Where:

Steps To Generate A Ring Signature:

A reference implementation of the hash function is that the byte data of M and A are spliced together, then the values obtained by using the traditional hash function (such as keccak256) are modular to N (where N is the order of a finite group on an elliptic curve).

● Next, the signing party wants to sign a message m, but does not want to let others know their identity while signing. The signing party then hides in a group by means of a ring signature. The signing party finds the public keys of n-1 people (keys which have appeared and been used in the system before, otherwise the signer can be easily identified by hiding amongst a group of new people). The signer numbers these keys, and randomly inserts his own public keys into a collection of n public keys. Let’s assume that the n public keys are:

Where pk[i] is the public key of the signing party.

Note: This step does not need to generate s[i] randomly, because s[i] will be calculated later.

● Next, the signer randomly generates k and calculates k·g. We can assume:

According to Equation 1, we can determine that if we have the private key sk[i]of pk[i] and if c[i] and k are known, we can find s[i] in reverse.

● Next is the introduction of the second formula,

Equation 2 is a recursive formula, and the second parameter form of Hash function is the same as the right side of Equation 1. This recursive formula means that when the s[x-1] and hash value c[x-1] corresponding to the x-1 public key are known, the hash value c[x] corresponding to the next public key will be calculated. Note that when x = 0, the previous x is actually n-1, because the subscript also takes a module for n.

Thus Equation 1 can be written as

We can then remove g on both sides

Note: The private key sk[i] plays a role here. If there is no sk[i], then s[i] cannot be found.

● Once s[i] is calculated by k, c[i] and sk[i], the “ring” is established; we can then drop k, because it is not needed anymore.

Therefore, if the above n equations are true, it also means that the person who generates the n equations has at least one private key of the n public keys.

● The ring signature data of the last message m is:

Looking back at the entire process of generating a ring signature, if you know the private key sk[i], then you can deduce s[i] so that c[1] , c[2] , …., c[n-1] forms a ring. Another way of thinking about it is if you want to loop a wire. The mathematics guarantees that only the person with the private key can connect the two ends of the wire to form a loop. Moreover, once it becomes a loop, there is no trace at the joint, which makes it impossible for someone to judge where the wire was connected.

Although the ring signature can be used to achieve a certain degree of anonymity, the real signer will still be exposed in the ring. In the current public chain market, the zero-knowledge proof is still one of the best means to stay anonymous. That is not to say that ring signatures do not have their place or are not helpful — they are. If privacy requirements are not so high, or the signing party’s computing power is weak, a ring signature is an excellent choice. 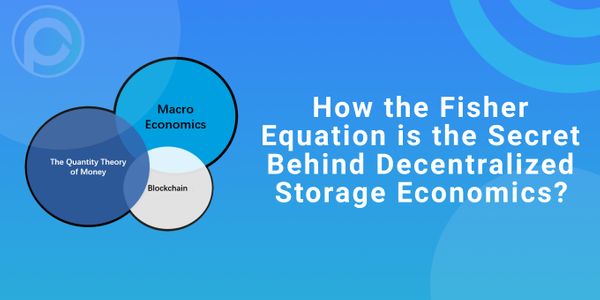 The Fisher equation not only helps understand inflation and deflation in the macroeconomy but serves as a model for the decentralized storage and distribution market.